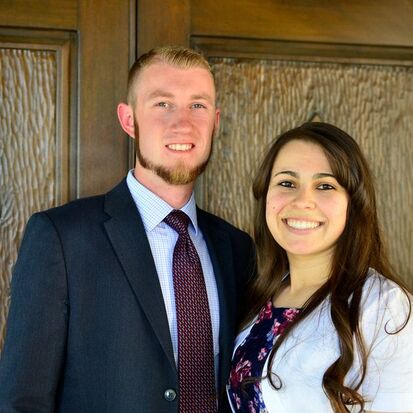 Steven Jones grew up in church and made a profession of faith when he was 7 years old but, when he was 15 God convicted his heart and he realized he never actually put his faith and trust in Jesus Christ so, on August 8th, 2008 he trusted Jesus Christ as his savior at a youth conference.

Soon after God affirmed in his heart that he was to be a preacher. Steven had already started preaching as a young teenager but now with Jesus in his heart God opened up more opportunities for him. At 16 years old Steven youth pastor left to pastor another church and it left Steven to teach the teens Sunday school class and lead the Wednesday night children’s ministry until his next youth pastor graduated bible college.

During his high school years, he met a young woman named Holly and started taking her to church with him. After six months she trusted Jesus Christ as her savior and soon after they got engaged. They were married on December 15, 2012.

God lead Steven to Heartland Baptist Bible College where, by God’s grace he graduated with a Pastoral theology degree in 2016. During his college years Holly and Steven had the opportunity to serve as the Dorm mom and Dad at Silver State Baptist Youth Camp. Once he graduated, he immediately moved to Artesia, New Mexico where he began serving at a church with the intent of transitioning into the pastorate. After 2 years at the church Steven believed God was moving him and after 4 months as the interim pastor, he and his wife left the church and moved to Carlsbad New Mexico where they Joined Landmark Baptist church and began working on staff there. At landmark, He taught the young adult Sunday school class, helped run the RU addictions ministry program, was the VBS Director, and did most anything his pastor needed him too.
​
While serving in Carlsbad Steven got a call from a pastor in Colorado who wanted to recommend him to be the next pastor at Peak View Baptist Church. On July 14th 2019 Steven accepted the call to be the pastor at PVBC where he continues to serve with his wife and 2 children Izabel (2) and Braxton (6 months) to this day.